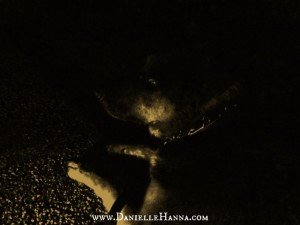 Hey, guys! Molly the Adventure Dog again. Boy, do we have a story to tell you! We almost didn’t make it back from our last adventure alive! (Anyways, we were a little concerned.)

See, my Grandma (my girl’s mom) made the mistake of letting us know that the Northern Lights were supposed to be out. Maybe you heard about it – it was all over Facebook, cuz it was suppose to be a really big light show.

Well, my girl and me had never actually seen the Northern Lights before. Fancy that! Living in North Dakota so long, and we’d never seen it! I guess cuz we’re usually in bed during the middle of the night. Anyways, my girl and I decided it was about time to go see this thing for ourselves.

I was all excited when my girl grabbed the flashlight and the bug spray about the time we usually went to bed. A car ride? At this time of night?! I was all for it. We jumped into the car and drove several miles out of town. My girl knew a quiet country road where there’d be no city lights. We parked, turned off the headlights, and waited.

In North Dakota, we’re so far north, and so far toward the western end of our time zone, that we could still see the last light of the sunset at 11:00 p.m. But eventually the moon was the only big light in the sky, and the stars started coming out. We watched and waited.

We weren’t even really sure what we were lookin’ for. Aside from photographs, we’d never seen the Northern Lights. In fact, we used to think they only showed up in Alaska or the Yukon, or something’. My girl was pretty stoked when she learned they could actually be seen from North Dakota. We figured there might be a tiny glow in the north or something.

It got closer to midnight, and we watched and waited without seeing anything but some hazy clouds drift across the stars. If the moon hadn’ta been out, we wouldn’ta seen those clouds at all.

But then we stared a little harder. What funny clouds. The moonlight reflecting off them was kinda pulsing. And they’d be here for a few minutes, then gone, then back again.

We kept a close eye on them funny clouds, and a half hour later, they were getting bigger and bigger and filling more of the sky. And they rippled like my ears when I stick my head out the car window.

That’s when it dawned on us. Those weren’t no clouds! That was the Northern Lights!

My girl grabbed the flashlight and we got out of the car.

Here’s the part where I have to confess, I got a bit distracted. We’d driven this road lots of times, but I’d never gotten out to sniff!

My girl, however, was focused on the sky. Ribbons of white light were flickering across the entire northern sky, from east to west. It was bigger than we’d expected! The light flickered like someone moving their hand in front of a flashlight beam.

We sat on the side of the road by the front bumper of the car and watched the show for a good half hour. Okay, my girl watched. I swear there was something in the grass on the other side of the road. My girl finally looked at whatever I was staring at and saw a firefly. Well, it was a very important firefly! Least ways, I thought so!

We heard coyotes, too. My girl said you couldn’t ask for a prettier sound track to the Aurora Borealis. I said I was gonna kick their ass if they came any closer.

Anyways, we watched the lights until about midnight, then got up to go home. With the headlights on, it was harder to see the Lights anymore, but after a few miles, my girl swore they were getting brighter or something. We pulled over again and she turned off the headlights and got out. She told me to wait cuz she’d only be a minute.

A few seconds later, she dove back into the front seat, looking kinda shocked. “WOW!” she said.

She took a few minutes to pull herself back together, then said, “You gotta see this. And I want something to hang on to when I go out there again.”

I wagged my tail as she popped open the back door. As soon as my paws touched the pavement, I started sniffing the tall grass along the roadside. But my girl hung on to my leash, leaned against the back of the car, and stared straight up.

“Oh my god,” she kept saying. “It’s like it’s gonna suck you right off the ground.”

I took a peek. All four horizons were ablaze with white light, streaking toward a single point in the sky straight above our heads. It looked like sand whistling through a canyon, and it seemed like there shoulda been a wind. But it was all quiet. 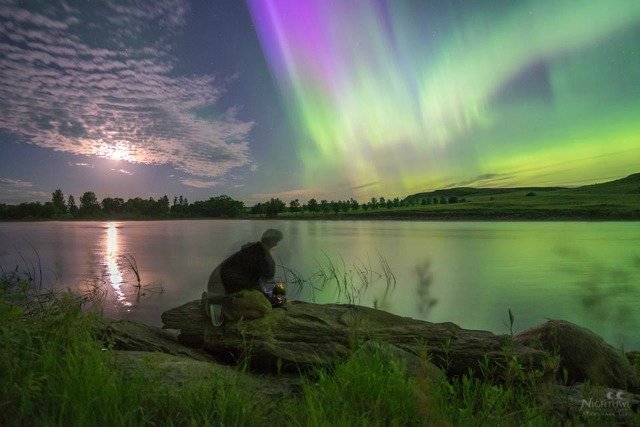 Neat, I said, and went back to sniffing the ditch. I swear some dog peed there three weeks ago …

My girl stared up at the sky until she couldn’t stand it anymore. She said it was all moving so fast, she felt like she was gonna be pulled into the sky at any moment – which was why she was hanging on to me and leaning against the car.

“I wonder what kind of explanation early peoples created for this phenomenon,” she said in an awed voice.

I finally found where that dog peed and had a leek on it to let him know Molly was in the neighborhood.

Once my girl was good and dizzy from staring at a swirling sky, we got back in the car and finally drove home.

Back on our comfy sofa, my girl surfed the web for information on why the lights were white and not green, like we’d expected. In fact, photos that people were posting to Facebook in real time were showing up green. Apparently, cameras pick up more color than the human eye.

She turned off her phone and snuggled me where I was crashed on the other end of the sofa. (Sniffing ditches at midnight is exhausting.)

“Thanks for coming with me tonight,” she said. “That was special to share that with my girl-o. I’ll remember this night for a long time.”

Me, too. Girl and dog, going on a car ride in the dead of the night. Listening to the crickets and stalking fireflies  and kicking coyote ass and peein’ on stuff …

I stretched and told her to rub my ear some more.

How a car ride at bed time ended in coyote ass-kicking, firefly stalking, & the #NorthernLights.

To Marshall Lipp of Nightowl Photography. Marshall is a local North Dakota photographer who does really awesome stuff with night scenes. My girl’s camera wasn’t good enough to pick up the Northern Lights, and Marshall gave us permission to use his photos. (Which clearly turned out much better than hers – hence why we used them.) Go check him out at the links below! Thanks, Marshall! 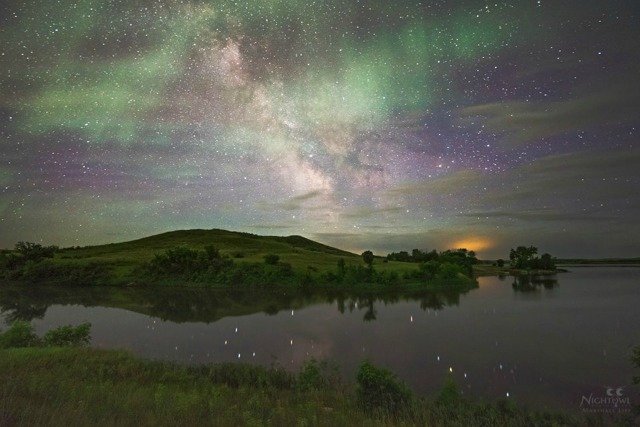