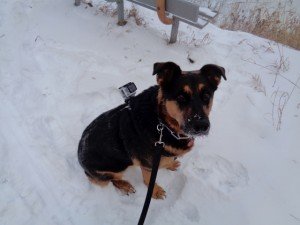 Molly the Adventure Dog with her GoPro

Hey, guys! Molly the Adventure Dog, here. I get to write a blog post again! (Smiles and wags tail.) Actually, I was gonna make a brand new video for you with my GoPro (Check out the one I did last month, Dakota Winter) … but due to unforseen circumstances, there will be no video this time. (Droops head.)

See, my girl and I discovered a new single track trail down by the river. Great place to record a new dog-mounted video with the GoPro camera! So last week, she strapped me into my special harness and attached the GoPro. All set!

We hit the new trail, and I was all excited to run and sniff and get new footage. And I was kinda pulling the leash a little too fast for my human. See, she had hurt her foot recently, and couldn’t go as fast as me. So she let me off the leash so I could burn my energy.

Now, I’ll have you know, I’m a very responsible dog. I would never allow anything to break my concentration on my girl.

Except for a deer. 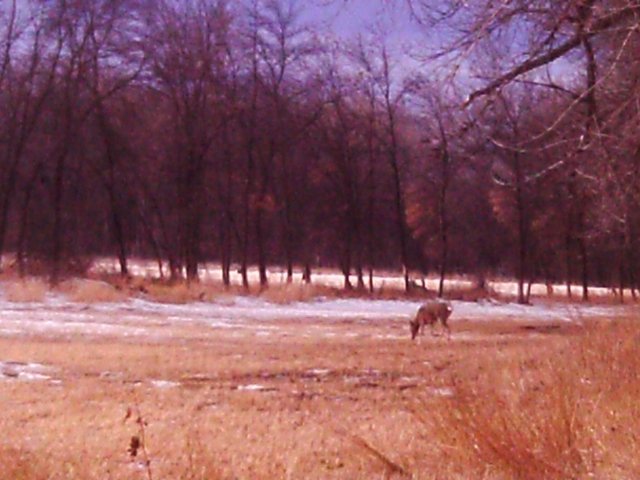 So we ’round the bend, and just ahead of us is a little wooded draw. (For you non-North Dakotans, that’s a little rift in the ground, full of trees.) And wouldn’tcha know, there was a deer in there, all curled up in the snow, trying to take an afternoon nap. Well, she takes one look at me, jumps up, and runs.

Well, what was I supposed to do? Obviously, she wanted to play!

I chased that deer clean through that draw and out the other side again, and all over half the town! (It’s a small town.)

And then I lost her.

And then I got distracted and started sniffin’ stuff. 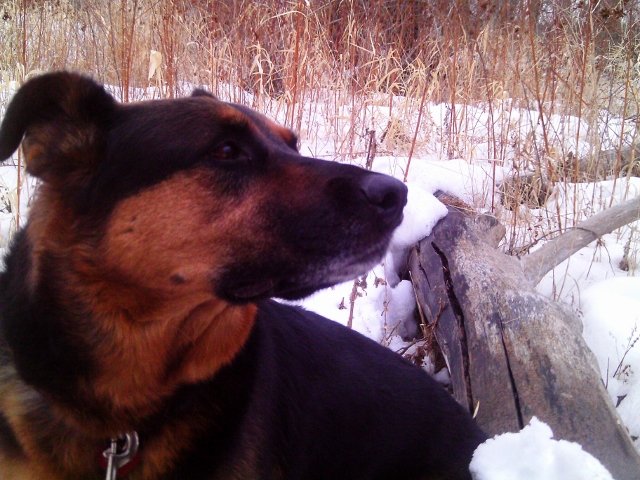 And then it dawned on me that my girl hadn’t chased the deer with me. Now, isn’t that funny? I got to wondering where she could be, so I doubled back. I thought maybe I’d find her back at the car.

So imagine my disappointment when she wasn’t there!

I figured she’d never go home without the car, so I stayed put right where I was.

Half an hour dragged by, and I started getting cold. I lay down in the snow, all tuckered out from my big run, and ate some snow since there wasn’t any water dish handy.

All of a sudden, another car pulled up. And you’ll never guess who it was! My Grandma! (My human Grandma. I don’t know if I’ve ever met my doggy grandma.) I wondered what on earth could have brought her all the way out here, but boy, was I happy to see her! I sniffed her all over to make sure it was really her, than jumped in the car and began to tell her that it was an emergency. My girl had gone missing!

We started driving around, and within two minutes, we found her, pretty much right where that deer had run out of the draw. She got into the car, looking very cold, and I kissed her all over, and scolded her for getting lost like that.

Then my girl asked me what I’d done with the GoPro.

We went home and warmed up, then went out again and traced all my paw prints through the snow. We went out again the next day and did the same thing. We also stopped by the sheriff’s office where my Grandpa works and I let him know that my girl had misplaced the GoPro. (She says I was wearing it, so it was my fault. I says I don’t remember losing it, so how could it be my fault?)

Anyway, my Grandpa is a detective. He can find anything.

My girl says it’s not gonna work that way, but if somebody runs across the camera and thinks to call the sheriff’s office, they’ll know who it belongs to.

Obviously, we’ve been disagreeing on a few details lately.

The upshot of it all, though, is that we don’t have a new video for you this time. And probably won’t until we find that GoPro again. My girl says we’re gonna comb every ditch and draw until it shows up. She says it’s gonna contain about five minutes of me chasing a deer, followed by twelve hours of staring up at a clear blue sky …

Anyway, I played with the deer. That part was fun. 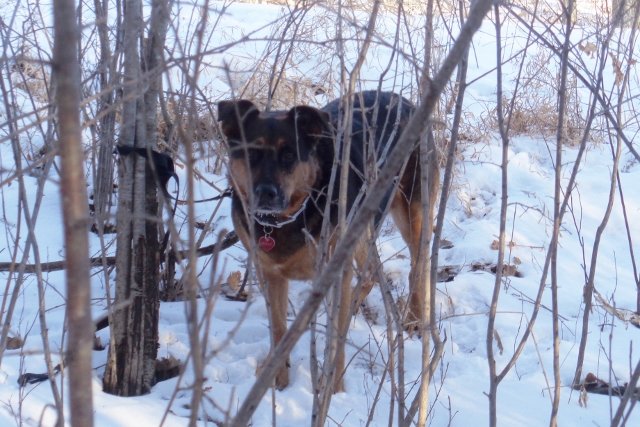 Me tied to a tree in the wooded draw while my girl looks for the GoPro. Yep. I’m on restriction.

Stupid dog. Once again, she has managed to ruin everything. It looks like I’m going to have to step in and save the day. Please enjoy my very own original documentary, Cattitude, which made its debut appearance at the old blog precisely a year ago, March 3, 2014. (At last! Culture!)