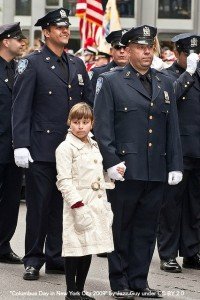 The following is adapted from my personal journal. Sam, a detective with the McLean County Sheriff’s Office, is also my surrogate dad. He “found” me in December 2013, a very broken young woman, the product of a dysfunctional family. My own father had died when I was two years old.

Sam and I returned to my car. As I merged into the heavy traffic on State Street, we talked about my counseling session. He had been the one to talk me into counseling in the first place, and today I’d brought him with me to sit in on one of my sessions.

Sam’s face was very subdued. “I guess I never realized until now how much I meant to you as your dad.”

I laughed to myself. How had he missed that point? It was the whole point. For most of my life, I had defined myself according to my relationship to my dad – first, as a fatherless daughter; and now, as the daughter of Sam.

“So all those times I’ve called you my hero, you thought I was joking?” I asked.

Even before I’d met Sam, I’d begun a study of the father-daughter relationship, and why it was so important. I wanted to know why my only longing in the world – a twisting, crushing, agonizing longing – was for a dad. Most of my life, I’d felt extremely vulnerable, even though I’d been kept excessively safe in my mother and step-dad’s cloister. I eventually attributed that sense of vulnerability to the lack of a male presence in my life. Not just any male presence. A man who was both strong enough to make me feel safe, and gentle enough to make me feel cared about.

It had taken me twenty-six years to find that man. And I discovered then that I hadn’t in any way outgrown my need for a Daddy.

Sam stared distantly down the road – as if he were really staring into the future. “It’s gonna be hard giving you up when some guy comes along and sweeps you off your feet. No one’s gonna be good enough.”

It was the second time he’d said something like that. In the books and web articles I’d read, I’d heard about fathers feeling that way toward their daughters. Like Brian A. Klems in his book, Oh Boy, You’re Having a Girl. “Having a daughter,” he said, “is all about thinking long term and laying the groudwork to make sure she can grow up to be a smart, happy, healthy adult woman who loathes all men except for her dad.” Only half-joking, dads like Brian swore they wouldn’t let their girls start dating until they were thirty-five, and that any boy who showed up to court her would have to pass a mine field and a row of army tanks. 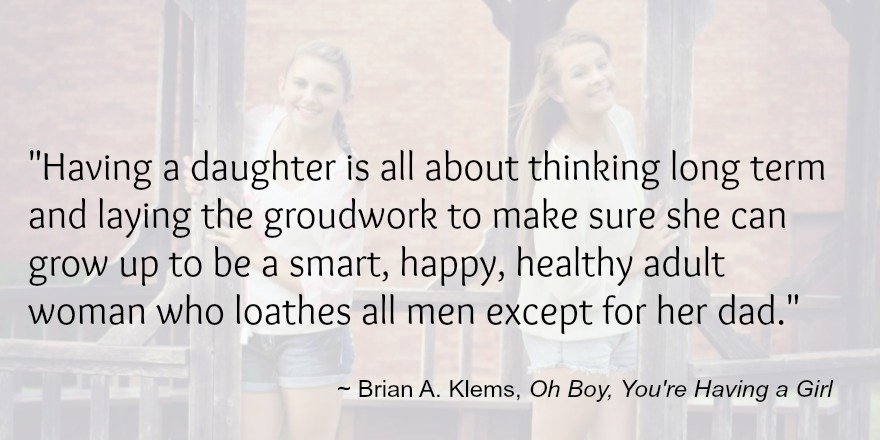 At first, I didn’t believe dads like that existed. Later, I burned with envy for the girls who were lucky enough to have such a dad. Sure, there was the old war of teen against parent. But underneath that was the certain knowledge that Daddy loved her.

Never in a million years had I dared to hope Sam would ever feel that way about me. Yet here it was. He was jealous of some guy who didn’t even exist yet.

I smiled. “I picture me bringing him to your house –”

I laughed and continued my thought. “– and you’ll be out front testing the lights on your patrol car and swinging a pair of handcuffs.”

Sam shook his head. “Whoever he is, I’m not gonna like him.”

I smiled. “Yeah, I figured. Don’t worry. It’ll be a long time before I start dating.”

Sam rolled his eyes and turned his gaze toward the passenger window. “No, it won’t.” The drone in his voice may have been to assure me I wasn’t so messed up I’d never start a relationship with a man. Or it may have been a complaint against the unfairness of adopting a daughter who was already old enough to date.

He still didn’t comprehend. To him, I was an attractive twenty-seven-year-old woman, and it was only a matter of time before I crossed paths with a handsome young man and started spending my time with that guy instead of him.

He still didn’t get that the thought of men, of dating, of sex and marriage, scared the shit out of me. He didn’t get that I was still just a little girl inside, and that the only man I wanted in my life was my Daddy. Yes, I was twenty-seven years old. But having grown up without a Daddy – having grown up with a constant sense of vulnerability – I was mentally and emotionally just a little girl. I was as scared of the world of romance as I imagine a child bride would be.

And having lost both my father as a toddler and a short-lived father figure as a teen, I was in no hurry to grow up. I grasped for some way to help Sam understand that.

“I used to think about having to let my step-dad walk me down the aisle at my wedding,” I said, “and I hated it. I hated it so bad, it was one of the reasons I never wanted to get married.”

Extreme? Perhaps. It was merely one out of a hundred reasons. I had determined that being the husband of my mother didn’t necessarily make a man my dad. So how could he give away a girl whose heart had never been his to give?

As the words formed on my mouth, I doubted if they really expressed what I was trying to say. But Sam turned my words over for a moment. Then nodded. His odd way of throwing his head back, then bringing it down again. He caught my drift, though I expected the full meaning was still lost to him.

Now that I finally had a Daddy, I didn’t ever want to quit being his little girl. Not even if I got married. Being “adopted” at the age of twenty-six … now talking to other adult women who had lost their dads or never had one … it’s all made me realize: No woman ever outgrows her need for her dad. 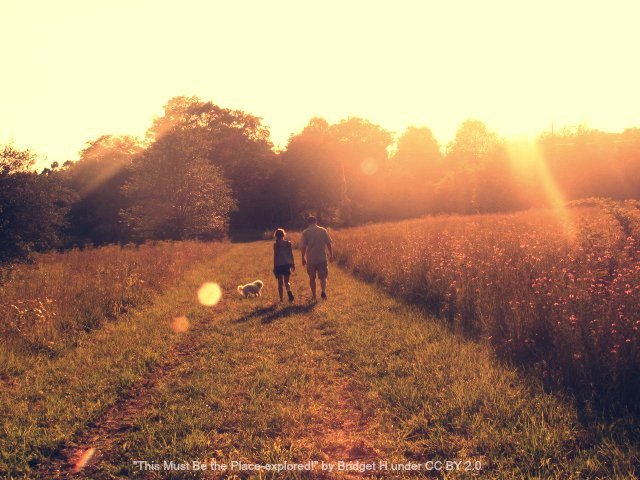