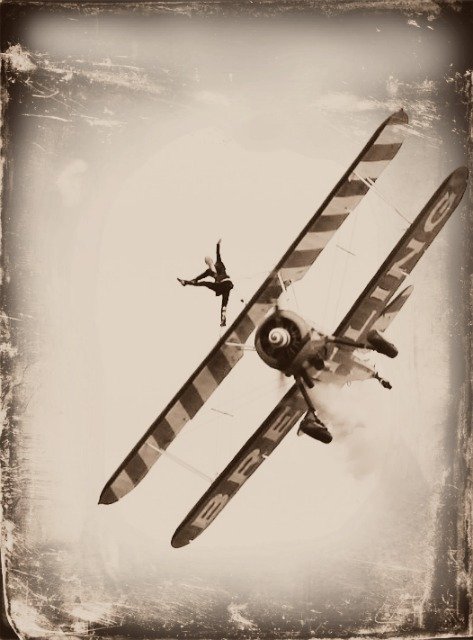 There are many stereotypes about authors, and many facts which are surprising. But the upshot is … authors are not normal. And the insane things we do in the name of research is only a starting point. (No, I’ve never tried wing walking. But … could be fun …)

I had a conversation with my brother the other day in which we decided that Earnest Hemingway established the author stereotype: Taciturn, mysterious, suave, and always equipped with a beverage of either coffee or alcohol.

But that would be a stereotype. (Except for the coffee. The coffee comes very close to reality. I’m one of very few authors who do not have a coffee mug glued to my hand.)

Sadly, we’re not all suave. Far from it. Most of us are actually pretty loopy. Myself included.

Sadly, most authors are not suave. We’re actually pretty loopy.

Next Thing to a Creeper

I just got my first smartphone. (I know. So behind.) One of the reasons I was most excited to have a smartphone? Now when I’m at the mall or something, I can easily write notes on people I see and conversations I overhear, and everyone will think I’m merely texting like every other person with a smartphone. After all, I’m not trying to creep anybody out by staring at them, pen and notebook in hand. This way, I can be more subtle.

Smartphones: Enabling writers to be spies under the ruse of texting.

A recent conversation in one of my writer’s groups involved pen obsession. One author wrote in to report that her favorite pen had just died. We all chimed in with sympathetic remembrances of favorite pens and current dear companions of the inked variety.

Tweet this in honor of a pen you once loved.

The “What If?” Question

And don’t get me started on the “what if?” thing. Authors live with one foot in their story worlds at all times. Wherever they go and whatever they’re doing, every minuscule event is potential story fodder. Very much like Caleb, the toymaker in Charles Dickens’ tale The Cricket on the Hearth:

“Humph! Caleb, come here! Who’s that with the grey hair?”

“I don’t know, sir,” returned Caleb, in a whisper. “Never see him before, in all my life. A beautiful figure for a nut-cracker; quite a new model. With a screw-jaw opening down into his waistcoat, he’d be lovely.”

“Or for a fire-box, either,” observed Caleb, in deep contemplation, “what a model! Unscrew his head to put the matches in; turn him heels up’ards for the light; and what a fire-box for a gentleman’s mantel-shelf, just as he stands!”

“Not half ugly enough,” said Tackleton.

Granted, we authors aren’t necessarily making nutcrackers and match boxes out of old men. But we’re about as bad. Worse, maybe.

I just discovered the Facebook page of a writers organization, the Authors Combat Academy, dedicated to answering all your questions regarding everything from street fights to military operations. They recently posted a photo to their wall showing a quiet stream running through a green forest. The caption read as follows:

Check out this scene: Fighters will have to maneuver over roots and rocks, on and off paths, and even avoid stepping in bear dung!

What characters can fight with: big sticks! There are rocks in the stream and possibly a broken bottle or two at hand. Something as simple as a discarded plastic bag can be handy in a fight if you can grab it. There’s even enough water (2″ plus a little mud) to hold someone’s head under. But now I’m getting violent . . .

And, while you’re out scoping your scenery, be sure to figure out where and how to bury the body. [wink emoticon]

Well, so much for the pastoral scene.

Only an author can walk into a room and ask, “Where to hide the body?” #amwriting

Characters Are People, Too

And I’m not even gonna talk about the tearful nights we cried into our pillows because we just found out one of our favorite characters dies. No, we don’t necessarily plan such a thing. We find out, much as the readers themselves do. And we don’t always like it.

The tearful nights we cry into our pillows because one of our favorite characters died.

We really do try to look normal on the outside. (Some of us more than others. I think Randy Ingermanson, “America’s Mad Professor of Fiction Writing,” gave up on that.) But the fact remains: There’s no telling what sort of drama is going on inside our heads at any given moment. At first glance, it seems so horribly … imbalanced. One stereotype … which is probably true … is the phrase “crazy writer.” We wonder ourselves if we shouldn’t just be locked up in a ward.

But then Amazon rolls out this thing called “self-publishing” on Kindle, and writers are doing better than ever. We release our latest title, and everybody on our mailing list scrambles for their copy. (Not to mention … someone signed up for the mailing list in the first place!) We get interviewed on other people’s blogs and people leave us nice comments. We even get reviews on Goodreads.

Since people still want authors, I guess we’ll just keep on being crazy!

Blog Posts (All of 'Em), The Author's Life