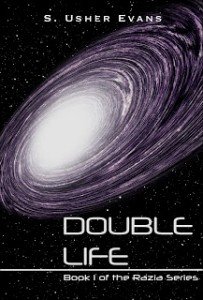 I’ve never read science fiction before – probably because I thought I wouldn’t like it. So my first foray into this genre – Double Life by S. Usher Evans – was a pleasant surprise.

Lyssa Peate hates her job. She spends her days “excavating” planets – exploring their resources and selling them to developers. She’d rather be putting her analytic skills to use, cyber-tracking pirates and turning them in for bounty money. Couple problems with that: To track a pirate, you have to be a pirate (which puts you in danger with the Universal Police), and to be a pirate, you have to be a man (ask any pirate you like). Still, Lyssa dons her alter-ego, Razia, and stalks the cyber trail.

Caught between conflicting worlds, deception, and a double life, Lyssa struggles to understand who she really is and where she really belongs.

This book rekindled some long-lost feelings I had when I was young and steeped to my eyebrows in adventure novels. Lyssa – or Razia, as she prefers to be called – was a real kick. At times, I wanted to punch some sense into her, but usually I was laughing too hard at her red-hot temper or sympathizing too deeply about what it felt like to be trapped between a rock and a hard spot. I enjoy kick-ass heroines, and she was one of the best.

While the adventure barreled forward, we had plenty of opportunity to get to know the characters on a deep level. Their relationships were complicated and real. They all had a history, and the author was sensitive to that, showing how past experiences brought the characters to where and who they were today. As readers of my blog are aware, I’m deeply interested in family relationships – and Double Life explored this arena at length, showcasing conflicting relationships with an absent father, a spiteful mother, resentful siblings, and one brother looking to make peace. (The imperturbable Vel was a real kick and the perfect thorn-in-the-side to Razia.)

I loved the mystery built around the phenomenon known as Leveman’s Vortex – depicted on the cover. It was thought to be the gate to heaven, and any ship which dared enter was destroyed in the gravitational forces. But Lyssa’s father had found the way in and brought Lyssa there many times … before he went missing.

As a side note, the phrase “Leveman’s Vortex!” (used as a profanity) will now be stuck in my head forever.

My only regret is that the author didn’t go deeper into describing what her characters and her worlds looked like. The cultures, architecture, and garb of various worlds were clearly based on cultures we are familiar with on our own planet, which made it fairly easy to fill in the details on my own, but I would have enjoyed more insight into the author’s imagination.

Double Life was packed with adventure, humor, and depth, and I congratulate S. Usher Evans on a book well done!

Where You Can Get Your Copy

Second-Best Thing to Being There 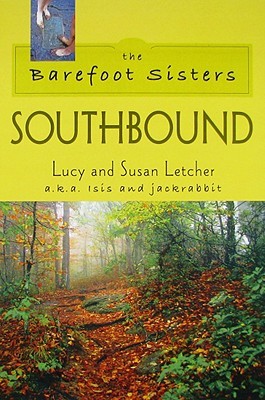 Not just an account of daily life hiking the Appalachian Trail, The Barefoot Sisters Southbound puts the pack on your shoulders and the terrain under your feet.

Sisters Lucy and Susan Letcher take on the 2,000-mile Appalachian Trail, something only the truly adventure-hardy do. But they add their own twist to the trek: They decide to go barefoot. It was never about prestige – in fact, they were surprised when their fame spread up and down the trail. Barefoot was simply the way they’d always explored the outdoors. “As long as it’s fun,” they promised each other. “As long as it’s comfortable.”

While every good travel-adventure memoir will describe the sights and sounds, few will dwell on the feel of the changing landscapes beneath your feet. This book connected me to the Trail in a way none other could have.

While Lucy and Susan – traveling under the trail names Isis and jackrabbit – frequently ask themselves whether they have what it takes to finish the Trail, I can only marvel at their stamina. First, hiking the Appalachian Trail. Second, hiking it barefoot. Third, hiking despite injuries. (jackrabbit, I feel for ya. I’ve had a twisted hip. You were INSANE.) Fourth, hiking barefoot with frost and snow coming on. And finally, hiking through one of the worst winters the locals can remember.

Along the way, the sisters meet a host of hikers who soon become like family. Together, they learn to overcome differences and even to depend on one another for survival. Throughout the journey, Isis and jackrabbit weigh the pros and cons of “hiking your own hike” versus seeking companionship on the trail. The Appalachian Trail itself becomes a 2,000-mile study on the respective beauties of independence and comradery.

Well done, girls. On both your hike, and your book.